“The true beauty of music is that it connects people.” Roy Ayers

This May 1st, Music fans were treated to a delicious array of Kenyan music, with something from everybody who managed to make it to the Carnivore grounds. 12 Kenyan bands played and it was a great introduction for Manu Dibango as the fans got to sing and dance and warm up, chasing away the chilly weather. Manu Dibango took to the stage at 7 PM but performances started pretty early with the Ghetto Classics at 1 PM.

The day was a cold and chilly, and the grounds at the Carnivore were a bit muddy. This did not deter the crowds who came to listen to some great music, dance, catch up and have a good time. Safaricom had anticipated this scenario which is why this time around fans got seats instead of having to sit on the ground, which although it was covered in some kind of plastic cover was still slightly damp.

They opened the event and thrilled fans with their mashups of different songs. What I love about the kids is how they have grown over time and how they are becoming masters at playing more and more complex songs. Their songs included  Camila Bello’s Havana and a mashup of rap songs. Mambo Tribe blends Jazz and traditional Mijikenda songs. They played Maisha, Kijembe and Kifudu. This time they also incorporated the sax in their music, playing with Rabai from Nairobi Horns. 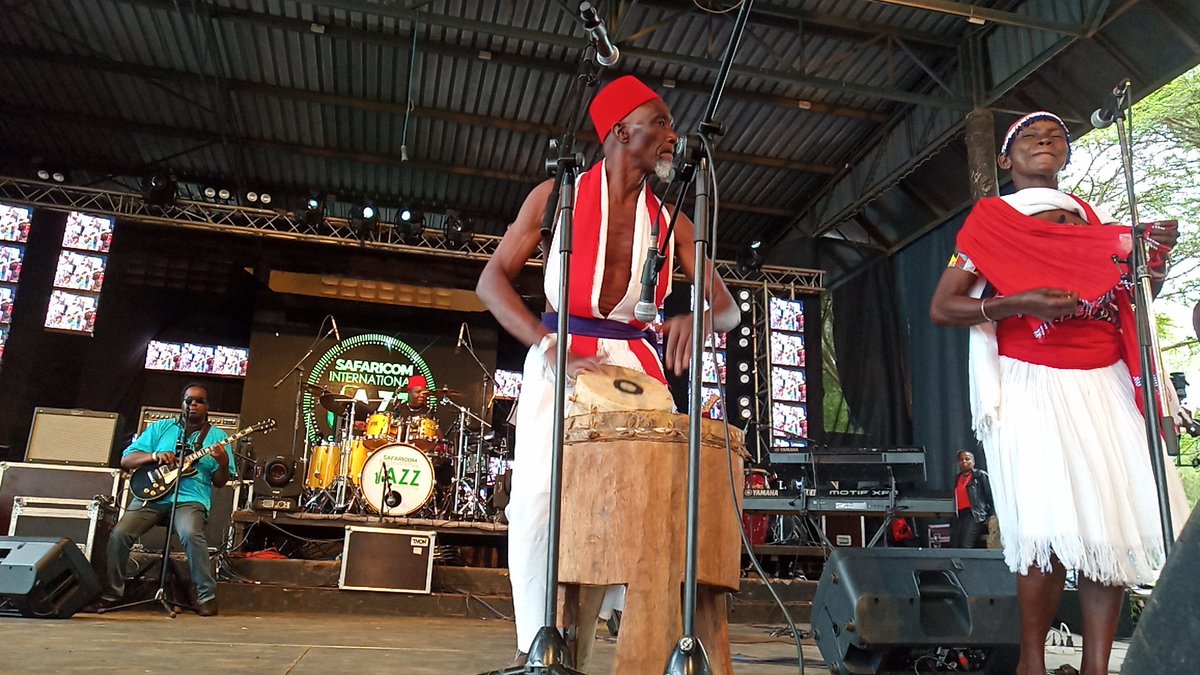 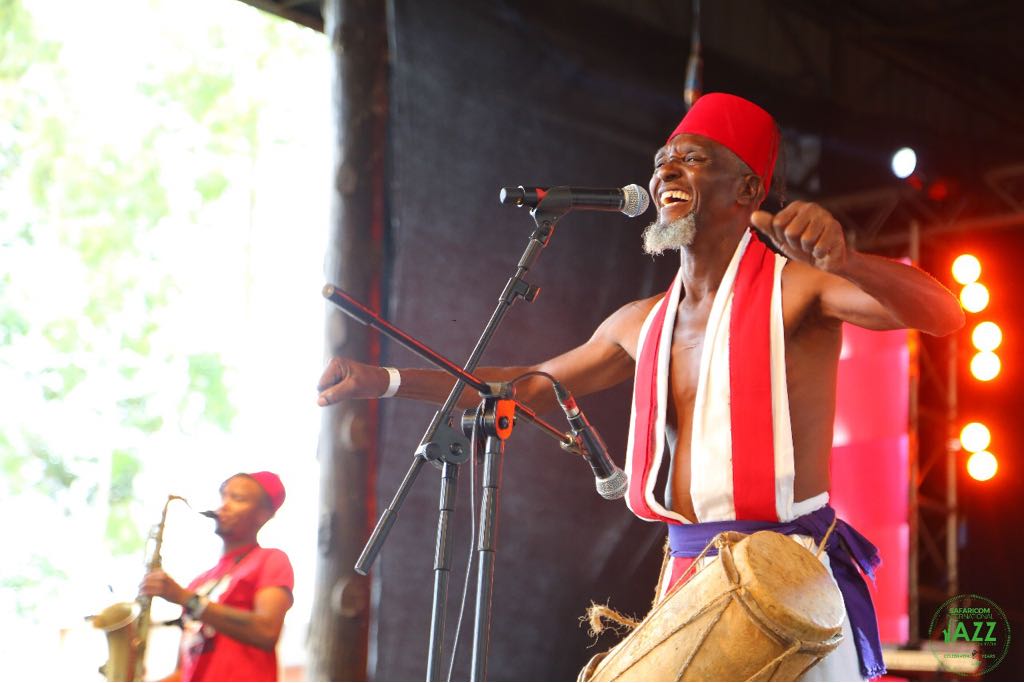 AfroSync were next on stage and they played “All God’s Children” and “Senegal. Sometimes less is more and I thoroughly enjoyed the performances. Smooth all the way. 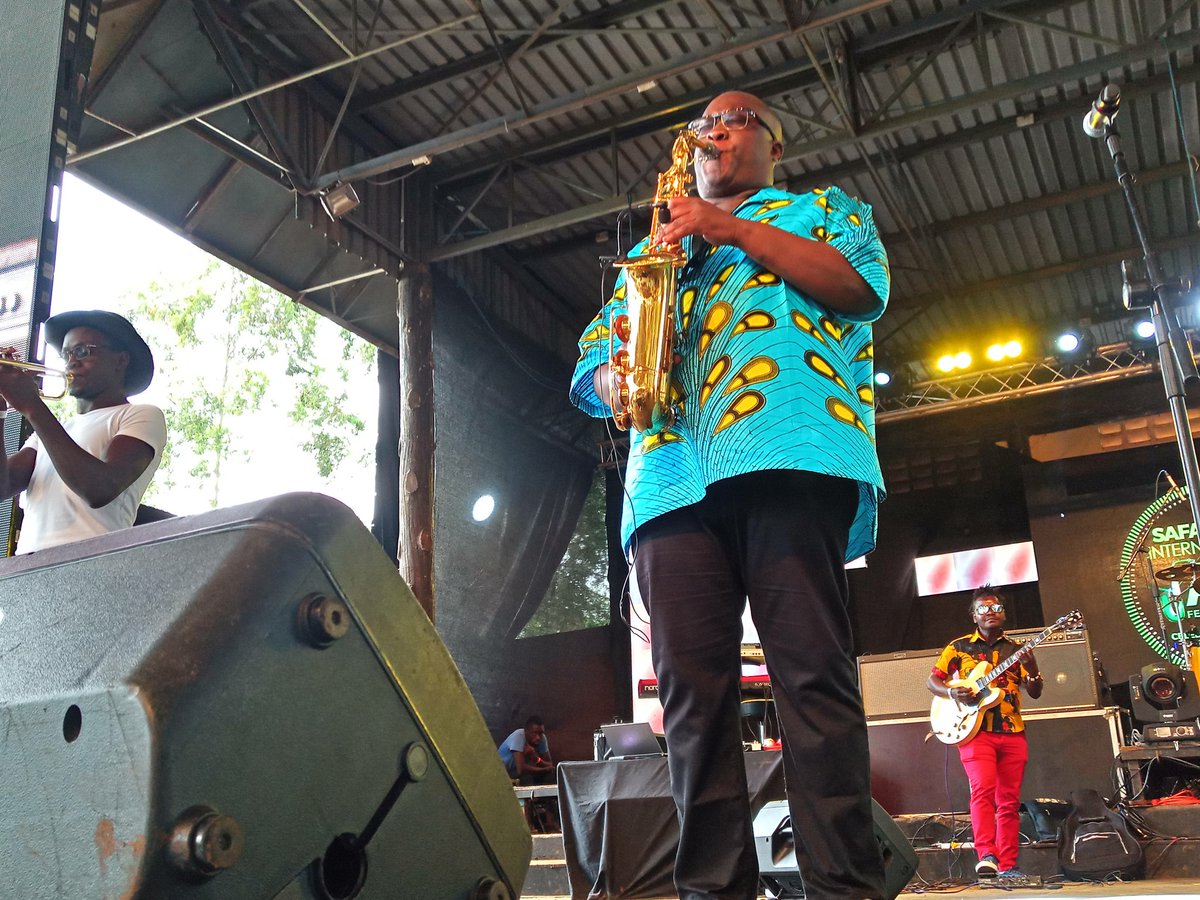 When Chris Bittok started his set with Y-Sharp – Osibisa I knew we were in for a treat. For those who are really young, you might not understand our fascination with this song. Y-Sharp was the theme song for Vitimbi and if you grew up in an age where there was only one tv station (the horror) then Vitimbi was our version of Comedy Central. He also played his own compositions  Facing South and Wololo. A memorable performance that was.

When @ChrisBittok decided to take us back to the 80s. 80s babies, do you remember this program? #TBT#SafaricomJazzAt5#MusicThatMoves#Twaweza#CamonX@SafaricomPLCpic.twitter.com/zBaAnpyxo9 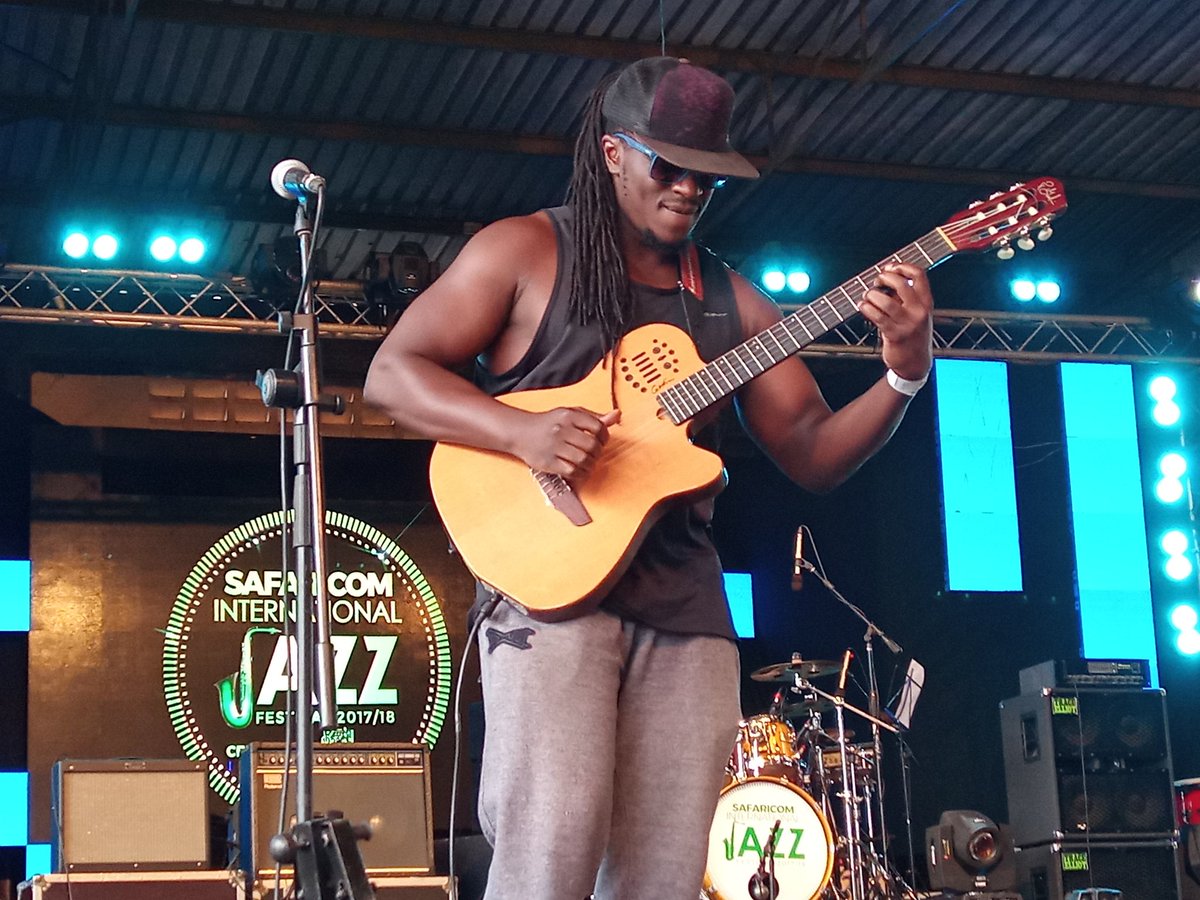 Eddie Grey is a fantastic guitarist and he did not disappoint. He delighted fans with a cover of Human Nature and Despacito before playing Every Day and No Trains To Kibera. He was joined by Swahili Ally who was playing the kora. Swahili Ally’s vocals are just haunting, it was beautiful.

Mwai and the Truth 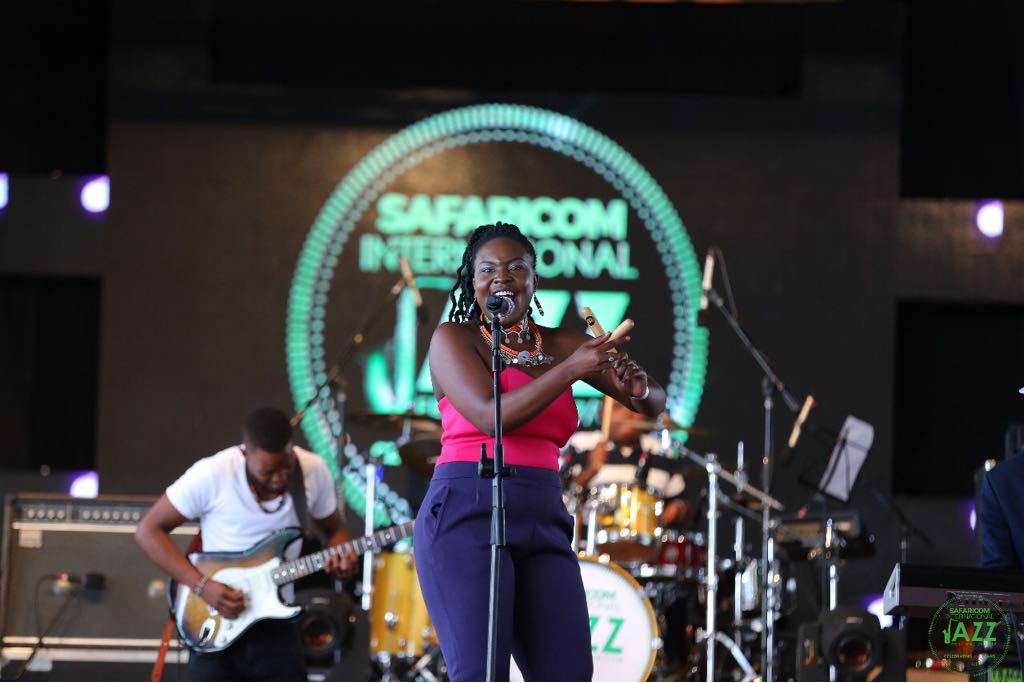 Mwai and the truth had their usual magic and this time they introduced a new element to the set, a powerful singer. The Limericks started with *Walking Down Jinja Road*  with an introduction of a Limericks rendition of Sauti Sol’s Live and Die In Africa. This was followed by Bird which is a rendition of a traditional Malagasy song. The band finished their set with Baraka, a gospel song that is always popular with the crowd. Juma Tutu brought the sunshine with his beautiful colourful sax and he had a surprise guest Mzee Ngala.

Juma Tutu and his beautiful sax on stage at #SafaricomJazzAt5. Great performance – he was really feeling the music pic.twitter.com/heHMiFcnjD Joseph Ngala aka Mzee Ngala serenaded us and took us to a time when life was simpler and music was sweet. Juma Tutu really went all out. Four sax players on stage at #SafaricomJazzAt5 ???? #MusicThatMoves pic.twitter.com/0iqGt8n3e8 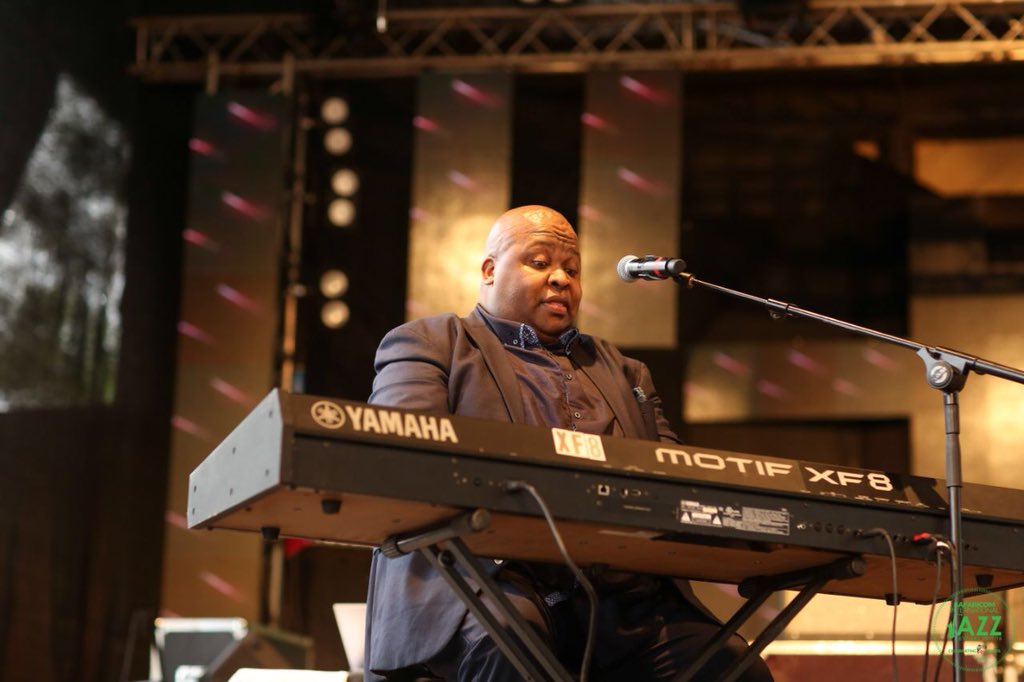 Jacob started his set with teasers of some crowd favourites that got appreciation from the crowd. He started off with Phantom Splendour and Enigma In Chief. Rabai and Mackinley from the Nairobi Horns were there to lend their horns and it was a beautiful set that was clearly a crowd favourite.

Kavutha then joined them to sing one day, Afro Blue and songea. All I could say is wow. Kavutha has a voice range on another level and she kept striking some high notes which left the crowd delighted.

James Gogo Simo is an entertainer who knows how to get the crowd up on their feet with his electric energy.  From the intro of very suspicious to Ngoma, Gogosimo to Penzi biggie the Gogo Simo Band kept the crowds entertained and asking for more and more, fans kept asking for an encore but time was up. You always know that Edward Parseen will be entertaining and he was. He started out by playing the  Game of Thrones theme tune, then went old school to play Reke Tumanwo – harusi yetu na yekeke, followed by his own composition Brew. He rounded it up with a Kenyan pop medley of Sanaipei Tande/Jua Kali, and Juju by Nameless. But before he left he did Keyande which is a Kisii Folk Song.

Edward Parseen with the Kenyan set.

Freshly back from a concert in Mali, Shamsi Music was back to thrill their fans with some good music. Shamsi Music is one of my favourite jazz bands and they have grown over the 2 years I have been listening to them. They started with Okaka, then played 7th Heaven. As they went into their last song Murata they took us back to time with an interlude of the Neighbours theme song which had the crowd singing along.

Nairobi Horns Project And Africa Plus Nairobi Horns were the last band to perform before the main act and they brought the fire. They played I need to ask, I think, dance like your life depends on it, African skies and Mukoye. They thrilled the crowd with their music and got the crowd dancing. They also collaborated with Africa Plus from South Africa to bring a South African feel to the event. What I love about Nairobi Horns is that their music is so danceable and they get the crowd involved – like with the song Mukoye where we had to shake our shoulders and go all the way to Kakamega. The perfect way to end the Kenyan set. 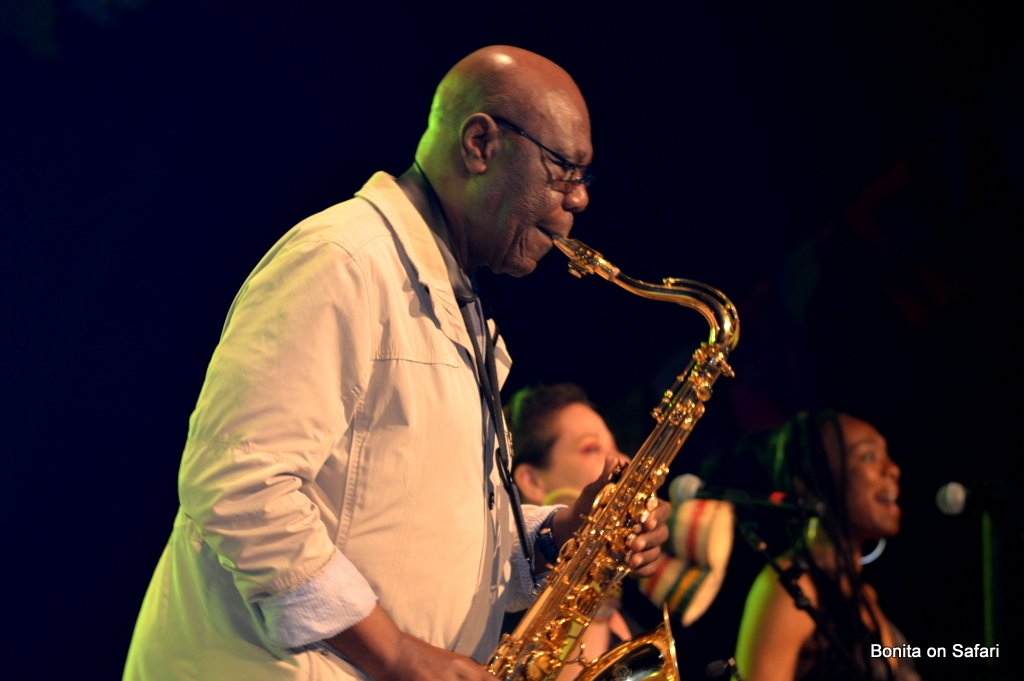 Manu Dibango; The man, the myth, the living legend! We’re honored to have him celebrate International #JazzDay with #SafaricomJazzAt5. #MusicThatMoves #Twaweza pic.twitter.com/OwG4KVfTcd

By the time Manu Dibango took to the stage, jazz fans were psyched up and ready to get down. It was easy to see why Manu Dibango has won a Grammy twice. He is very versatile in his playing and his tunes remain in your head even hours or days later. It was truly a pleasure to listen to him and his Soul Makosa band perform.

Manu Dibango himself. Graceful,tactful,versatile,afrojazzmaestro,soulful. See how he caresses his sax,calculates his steps and calmly smiles as his audience begs for more. He has mastered his art. Good music knows no age! Viva Soul Makossa! #safaricomJazz #SafaricomJazzAt5 pic.twitter.com/g3v4pGoUY9

At the end of the concert, Safaricom gave a cheque of 18 million to Ghetto Classics. For those who may not know all proceeds from Safaricom Jazz go towards helping the kids of Ghetto Classics to get both a musical and academic education. It was a fantastic concert.

It was good to see that the Kenyan artists are now doing more collaborations with other artists in order to bring a fresh feel to their set, instead of just playing the usual numbers that fans have heard before.

All in all, it was a great experience and I can’t wait for the next Jazz Lounge coming up. We did a short documentary on some of the artists who have taken part in the Safaricom Jazz International Festival. Check it out here.