Towards the end of 2020, the government unveiled a new look of the modernised Nairobi central railway station, introducing an integrated commuter rail system aimed at decongesting vehicular traffic. The Nairobi Commuter Rail Service which also entails a ride to the JKIA is set to ease the movement of people within the Nairobi Metropolitan Area while providing an efficient and cost-friendly mass rapid transit transport.

Currently, the 10 stations in Nairobi have commuter rails service and will be served by modern trains also known as DMUs (Diesel Multiple Units). New stations include; Umoja, Donholm, Buruburu, Githurai and Pipeline.

Kenya Railways has also introduced a night train. Here are the details – The Kenya Railways Night SGR Train From Nairobi To Mombasa & Here Is What You Need To Know

The DMUs commuter trains and link trains will transverse through these five estates operating on a fixed schedule across Nairobi.

The timelines are as follows for the 6 trains departing from Nairobi central station to Embakasi village terminus.

The Nairobi Commuter Rail Service to JKIA journey combines rail and road services for users going to and coming from the airport. Thus, it entails a ride on the DMU train up to Embakasi Village station, then a BRT (bus rapid transport) bus ride to the Jomo Kenyatta International Airport. This will cost you Ksh. 500.

On the other hand, there are 7 trains departing Embakasi Village each day to Nairobi Central Station. Below are the timelines.

6 modern trains leave the Nairobi Central Station for Syokimau through the day. The timelines are as follows.

The schedule for the modern train/DMUs leaving Syokimau station to Nairobi central station is as follows.

The commuter train rain arrives in the Nairobi Terminus at 8:00 am Below is the schedule.

As of this September 2021, residents could take the train from Athi River to the CBD and back. Now it has been revised to include Lukenya. Here is the new schedule – the revised Nairobi Central station to Kitengela route schedule. The second morning train will leave Lukenya station (Kitengela) at 7:00 am while the last evening train will be leaving Nairobi Central Station to Lukenya station at 18:40hrs. The Commuter train departs from Kikuyu as detailed below:

The train travelling from Nairobi central station to Ruiru departs Nairobi at 17:40 hrs and arrives at Ruiru – the fina stop – at 19:10 hrs. Below is the schedule.

The train from Ruiru takes one 1hour 35 minutes to arrive at Nairobi CBD. It leaves at 6:00 a.m and arrives at 7:35 a.m. Check below for other timelines.

A few pointers to note;

The commuter rails passengers will also have access to the SGR railway line, the Nairobi terminus and the Ongata Rongai railway station.

SGR updated its train schedule, making some changes on the Madaraka Express, the train from Nairobi to Mombasa. SGR schedule is as indicated below. Travel: How To Book The SGR Madaraka Express Train 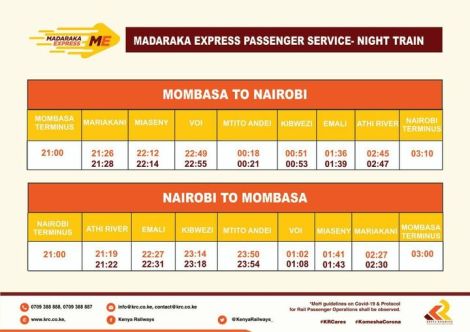 You can book the tickets 60 days in advance, although when it comes to group bookings, for more than 20 passengers, you need to book officially 30 days in advance.  Options to book the SGR remain either via USSD or online. Prices remain unaltered. Here is where to book.

Alongside the commuter railway system, President Uhuru Kenyatta commissioned the Kenya Railways Transit Shed. The transit shed will facilitate seamless transportation, reduce the cost for small scale traders and provide a facility where traders can self-clear their cargo within a day if coming from Mombasa.

Even though the travelling experience might be different due to the COVID-19 pandemic, we must live with the new norm. Therefore, to travel safely ensuring that you and your loved ones are protected, be sure to follow the COVID-19 regulations.

Check out 5 Exciting Things To Do During A RoadTrip

Health: How To Care For Your Ears And Protect Your Hearing